OUR FRIENDS FROM SCOTLAND 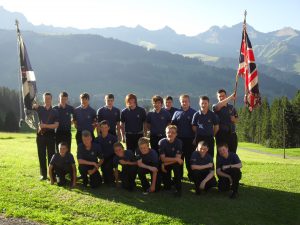 The 1st Viewpark Boys Brigade set off on Thursday 25th July on their summer trip to Adelboden in Switzerland. They arrived tired but excited 24 hours later after travelling through England across the channel on the ferry, then through France, Luxemburg into Switzerland.
On arrival the boys settled down quickly, and after lunch & dinner some even ventured into town to take in a local festival night while others rested after their long trip.

Sat 27th  Wee long lie. Up at 8am and out of chalet for 9am and headed for the Adelboden adventure park where the boys had fun on 4 levels of zip wires and abseiled off the bridge before 12, including the Captain, jumped off the bridge on a pendulum swing.
They then headed for the local outdoor swimming pool where they entertained the watching crowds by doing front flips summersaults and all sorts of other crazy jumps using a trampet next to the pool. Can’t imagine our swimming pools having this sort of thing –  too much cotton wool required. 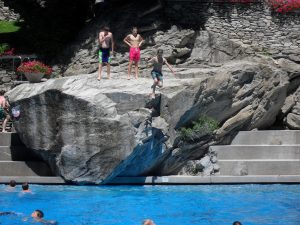 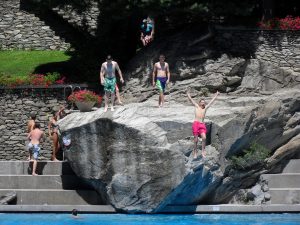 Sun 28th  Out early again and trip to Kandersteg.  Cable car up to the Oeschinensee mountain lake where this year the whole company took the plunge into the lakes cold waters, about 2 degrees that day. 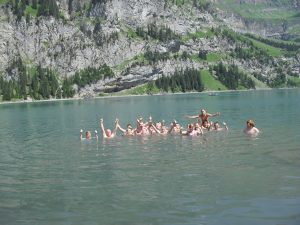 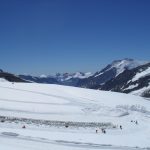 After lunch they headed back to the cable car but before going back down they had a go on the dry toboggan run where they had fun racing down the mountain side. After several runs Drew Millar announced, “It needs to be faster” and, “who needs brakes?”.

Mon 29th  Rain stopped play but still some boys ventured into town for, as they said, much needed supplies. Others spent day resting or playing cards, chess, table tennis or table football –  not a play station or TV in sight.

Tues 30th  Another early start as we headed for Brig and the water park where the boys tried out the flume dug into the side of the mountain, rock jumping and river rapids. 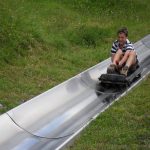 Their 2 hours in the park flew in and they even at one time had a train of 14 down the flume. Today was the boys 1st real taste of the local transport and after several train changes they realised just how efficient the Swiss transport system is and also how clean the stations and streets are compared to those in Scotland.

Wed 31st  The really early start of the holiday; up at 5am and on the 1st station platform at 7.30am where the boys took part in what is now a 1st Viewpark tradition –  platform sleeping? This was them heading for the top of Europe the mountain Jungfraujoch where they had a go at sledging not bad for being 3571 metres (11,782ft) above sea level.
As if that was not enough they took part in that good old Irn Bru phrase “taps aff”.  Bearing in mind it was minus 10, in true 1st Viewpark style they had the crowds in fits of laughter as they watched the boys pose for pictures with their taps aff. 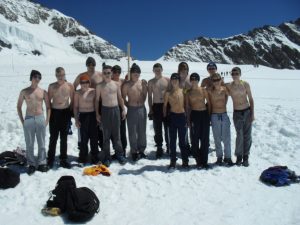 Thur 1st August  Day of leisure and bag packing before heading to the Adelboden Swiss National Day where the boys mixed with the locals and others from all over the world and handed out Tunnock’s tea cakes, snowballs, caramel logs and wavers. Imagine taking chocolate to the land of chocolate but those lucky enough to get some seemed to enjoy the treat. Captain Jim Penman then presented a box of local produce: Tunnocks biscuits and LA Sweets & Treats tablet to the events/tourist manager Albert Zumbach along with 150 Swiss francs for local charity. 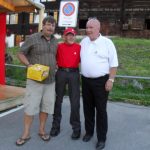 A similar box was also given to chalet owner Jurg Hari.
During the night which included local bands and singers one of the speakers introduced the boys as “Our friends from Scotland 1st Viewpark Boys Brigade” Once the entertainment was over the Company joined the street parade where they led the rest of the world section at the rear of the local parade. 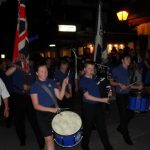 They were led by piper Dean McDonald and drummers Drew Millar & Kiera McDonald. The crowd loved the boys, taking pictures of them and clapping them as they marched past; an amazing night and what a way to finish the holiday. Before heading back to the chalet the boys watched an amazing firework display.

Fri 2nd  Early rise to finish packing and clean the chalet before handing it back, but before that Albert Zumbach paid a visit and presented each boy with an Adelboden shoulder bag and wished the boys a safe journey home and a speedy return in 2015.
Sat 3rd  Back home around 3pm, tired but with lots of stories to tell. 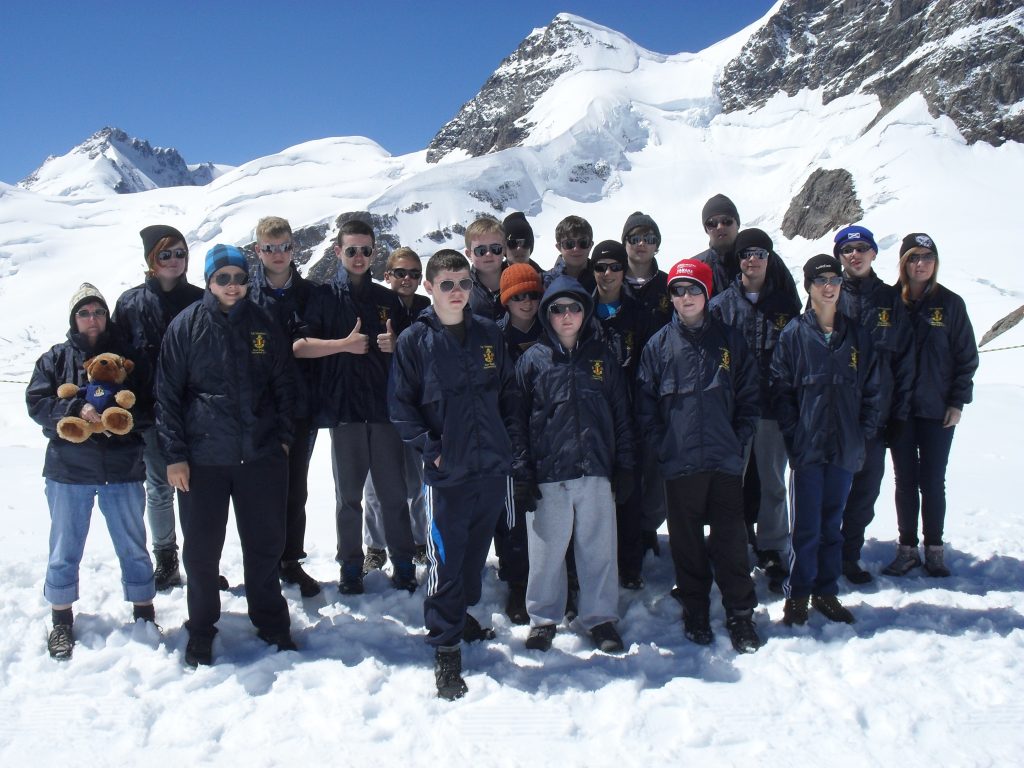 Captain Jim Penman would like to thank the following
Anne & George McMath for providing the trip t-shirts
Tunnocks & Warburtons for providing funding for waterproof jackets & hoodies
Ian Brown of Lanarkshire Print Embroidery for supply of t-shirts, jackets & hoodies on time at very short notice.
LA Sweets & Treats for the tablet again at very short notice.
B&M’s and Scotmid for allowing us to bag pack on their premises.
Tannochside Rangers Supporters Club & Viewpark Ladies Guild for donations towards trip costs.
The congregation of Viewpark Parish Church for all their support over the years.
Parents & friends for helping the trip become a reality.
Venture Abroad & rep James Woodhouse for planning the holiday and booking all the activities we wanted.
And of course his staff Lieutenants Janice Penman, Gordon Millar & Kirsty McDonald.

The boys can now look forward to 2015 when they will again head back to Switzerland via or returning via Disneyland Paris.